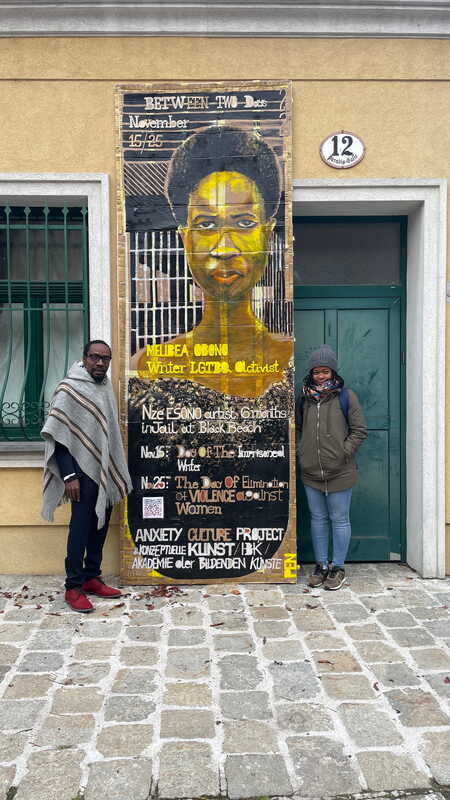 Melibea Obono and Ramón Esono stand outside the former “Heurigen” (wine tavern) where they lodged during their art residency in Vienna, on Paradisgasse / Paradis Street, located in Döbling, in the north end of the city. Here "Paradis" cannot be translated into "Paradise," as it refers to the name of composer Maria-Theresia Paradis.

Trifonia Melibea Obono (1982-) is an Equatorial Guinean novelist and LGBTQI+ activist. She writes on women’s lives in her country from a postcolonial perspective, and addresses questions related to women’s and LGBTIQ+’s rights. Her published works in Spanish include Herencia de bindendee (2016), La Bastarda (2016), Yo no quería ser madre (2016), La albina del dinero (2017), and Las mujeres hablan mucho y mal (2019). Banned in Equatorial Guinea because its main protagonist is lesbian, La Bastarda is the first novel by a female Equatorial Guinean writer to be translated into English. Herencia de bindendee was translated into German. Obono is the recipient of the 2019 Global Literature in Libraries Initiative Award, 2019 Ideal Woman Award (Equatorial Guinea), and 2018 International Prize for African Literature.

Ramón Nse Esono Ebalé, a.k.a. Jamón y Queso (1977-), is an Equatorial Guinean illustrator and comics artist. An opponent to the dictatorial regime of Teodoro Obiang Nguema Mbasog, he was arbitrarily arrested in 2017 and spent six months in the notorious Black Beach prison. Various NGOs, including Human Rights Watch and EG Justice, campaigned for his release. In 2018, Esono was allowed to go into exile. Among others, he is the illustrator of La pesadilla de Obi (2014) and also drew for Viajes dibujados (2018). His work has been exhibited at the 2019 venue of the “Africa imprescindible” art show in Spain; the University of South Florida, United States (SubRosa: The Language of Resistance, 2013); the University of Alicante, Spain (Convergencias y divergencias: jefe, dele una oportunidad a su cerebro, 2010); the Spanish Cultural Centre of San Salvador (Democraturas, 2010); and the Spanish Cultural Centres of Malabo and Bata, Equatorial Guinea (Un Opositor en la finca, 2010). He has contributed to the films Un día vi 10.000 elefantes (2015) and Anomalías eléctricas (2010). He is the recipient of the 2019 Couilles au cul Prize at the Festival Off de la Bande dessinée d’Angoulême for his activism against censorship, the 2018 Veu Lliure Prize (PEN, Catalan section), and the 2017 Courage in Editorial Cartooning Award (Cartoonists Rights Network International).

During their “Between Two Days” residency, Esono created a larger-than-life portrait of Obono and added text on a framed poster, which they carried through Vienna, Austria on 15 November 2021 from the house where they stayed in the suburbs to the Academy of Fine Arts in the downtown area. They were accompanied by photographer Astrid Young. The walk is about seven kilometres long. The gallery of annotated photographs displayed here documents their peregrination through urban space as well as various stops the walkers made, several of which in front of well-known city landmarks. The social engagement of Esono and Obono; the language written on the poster; the action (a long walk with different stations); the bright presence of two censored individuals in front of world-known institutions (art collections, universities, religious buildings, etc.), standing at their doors, but not getting inside, except at the last stop; and street scenes showing both the opulence and the poverty encountered in cities invite viewers to react in different ways to a multilayered sociocultural background. 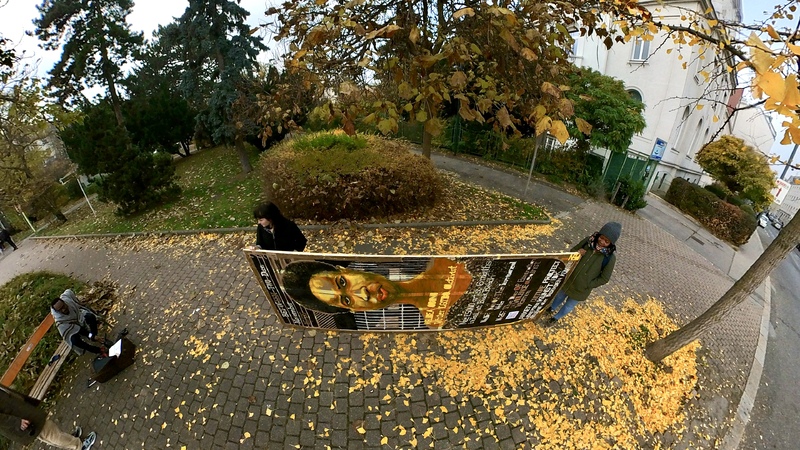 First stop, a few meters away from the starting point. 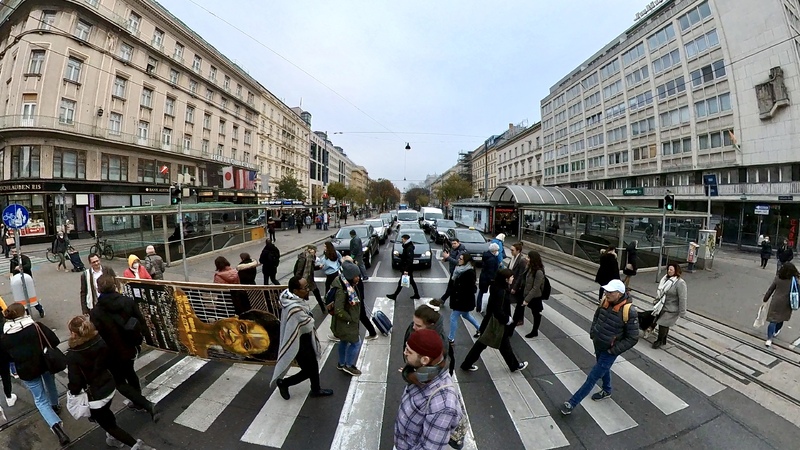 The “Gürtel” (in English, “belt”) is a large city road encompassing the inner districts of Vienna. City streets are busier within the limits of the Gürtel. One needs to be more careful with the framed poster. 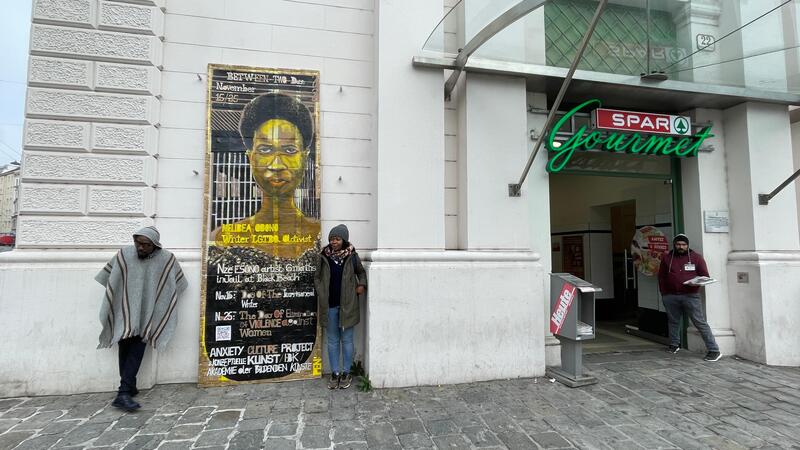 Spar Gourmet is an Austrian grocery franchise. The vendor standing in front of the store sells a well-known street magazine, Der Augustin. 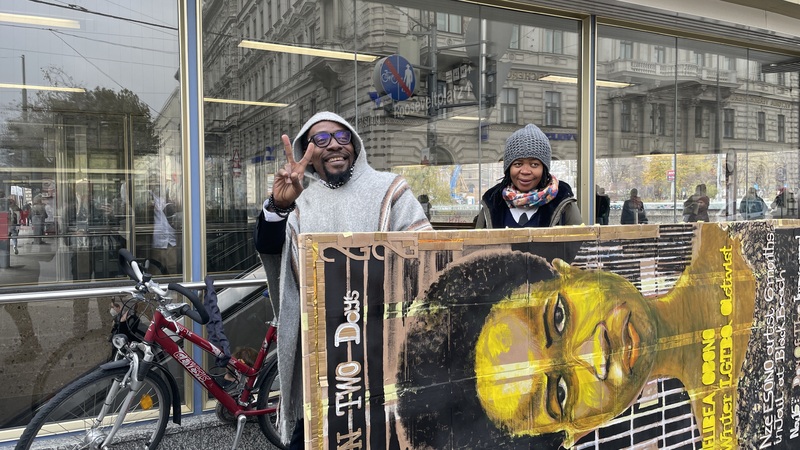 Schottentor Universität is a subway and tram station that is always busy. The University of Vienna is just a few steps away. 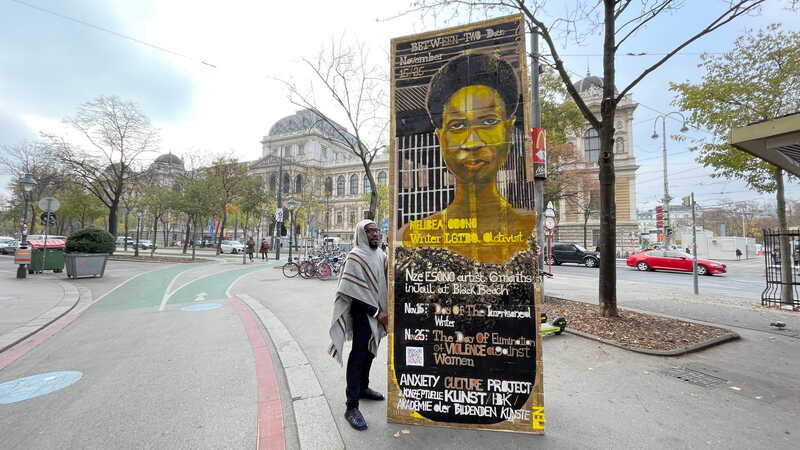 The University of Vienna

The prison bars drawn on the poster fit the architectural background, the main building of the University of Vienna / Universität Wien. 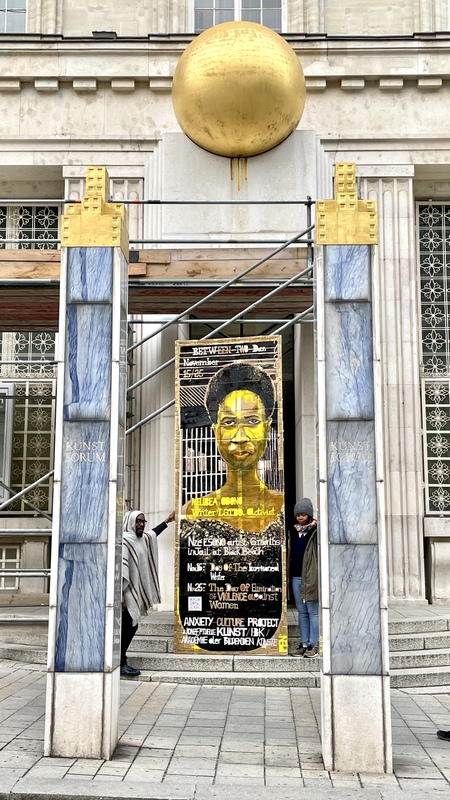 We are in the downtown core. Van Gogh, Miró, Kandinsky, Chagall, Warhol, Lichtenstein, and many contemporary artists are to be found in the Bank Austria Kunstforum / Art Gallery of Bank Austria, a top destination for art lovers. Esono and Obono show their poster on the doorstep. 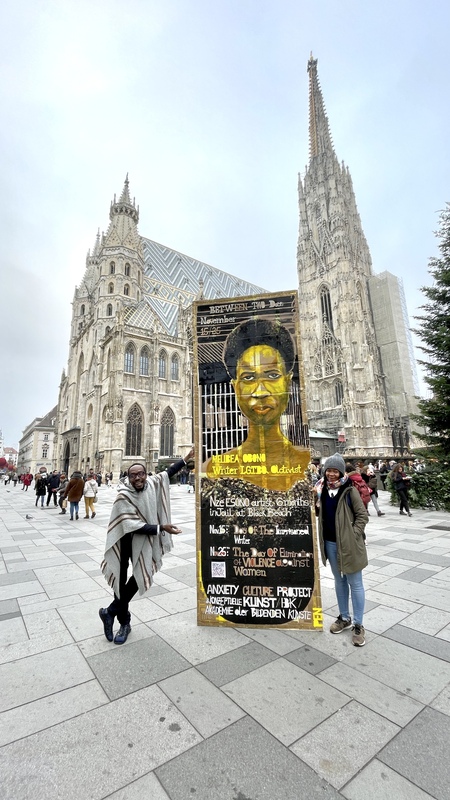 St. Stephen’s Cathedral / Stephansdom is the central point of Vienna and a tourist attraction. The prison bars featured on the poster blend into the building: aligned to the tower wall, they reach all the way to the second row of church windows. 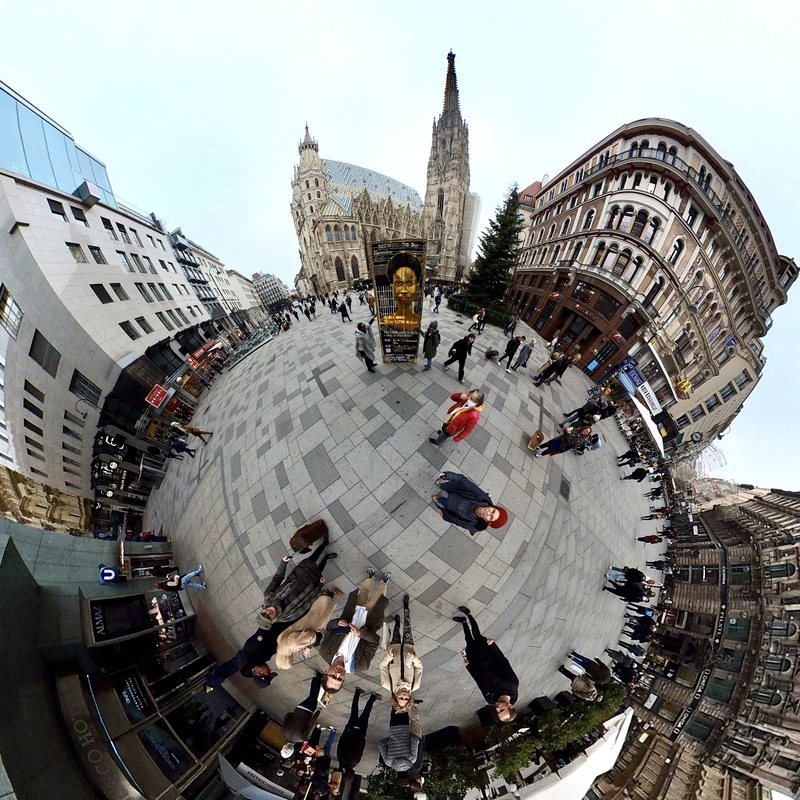 Thanks to a panoramic view, photographer Astrid Young transforms Esono and Obono’s action into a central event in the heart of Vienna. The cathedral, the neighbouring buildings, and the crowd now appear to be standing at the periphery of Stephansplatz, a large plaza in front of Stephansdom. 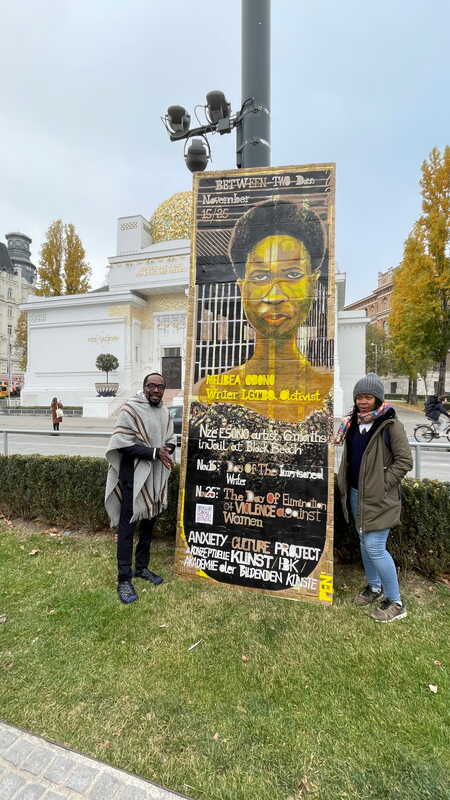 The Vienna Secession is an art movement formed in 1897 by a group of Austrian painters, graphic artists, sculptors, and architects. Its most famous member was Gustav Klimt. The headquarters are the Secession Building, also a famous art gallery. 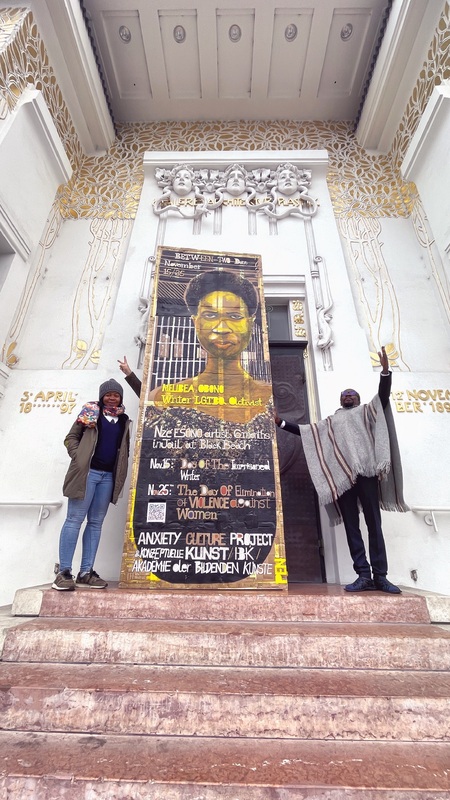 On the steps of the Secession

Esono and Obono’s poster is as golden as the decorations of the Secession. 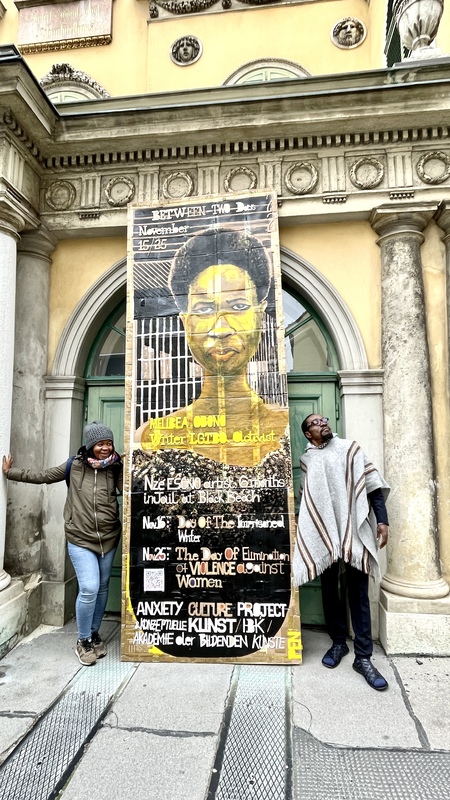 The Theater an der Wien opened its door in 1801. Esono and Obono stand in front of a door in the Lehárgasse / Lehár Street. 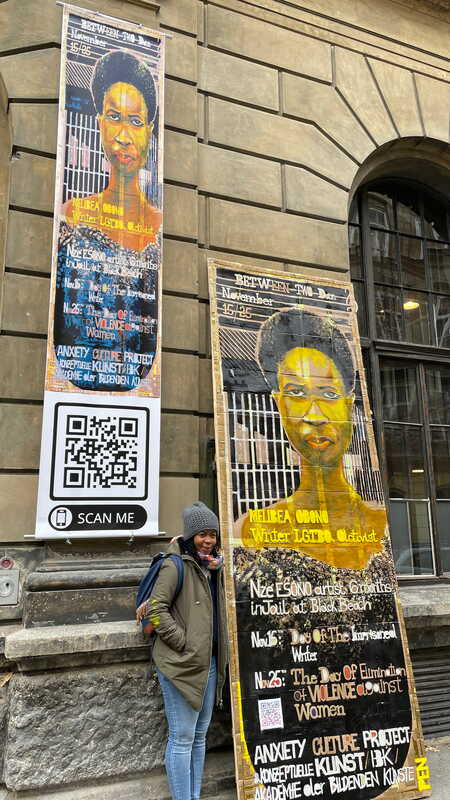 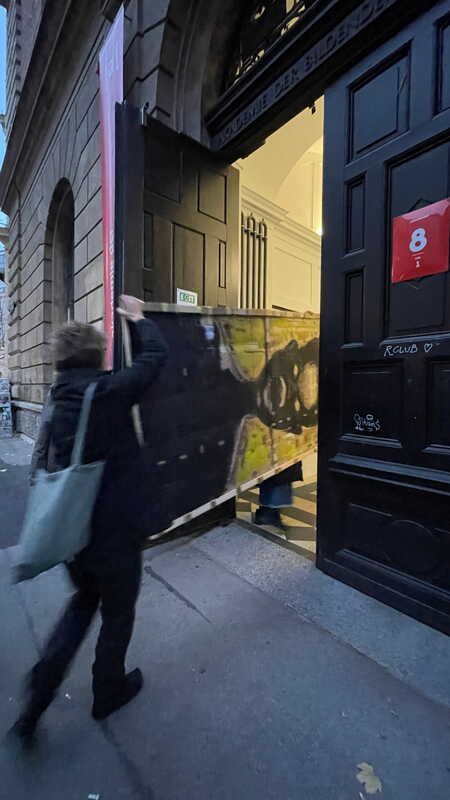 Wir sind am Ziel! Last station: the door of the Academy of Fine Arts opens. Esono and Obono enter the building. What we see here is the back of their poster.