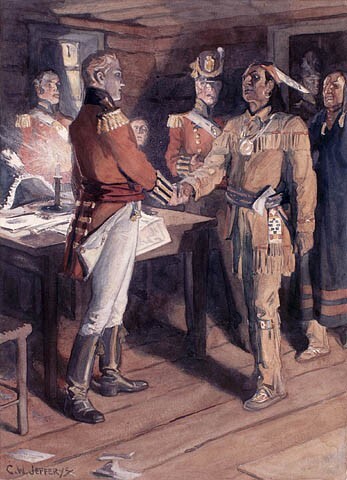 The meeting of Brock and Tecumseh in 1812.  Library and Archives Canada.

At the outset of the war, it was clear to General Brock that there was no immediate threat to Niagara.   The American forces in the area lacked supplies and were disorganized.  And General Dearborn, who was based in Albany, seemed reluctant to initiate an attack.   As a result, Brock turned his attention to the western part of the province.

Brock felt it was imperative for the British to secure an alliance with Indigenous peoples early in the war.  To accomplish this, he advocated for the capture of Michilimackinac (Mackinac Island, Michagan) and Detroit.  A successful British invasion of Mackinac Island on July 17 secured the cooperation of the First Nations.  But the Americans under General Hull had easily occupied Sandwich (Windsor) on July 12.  With no activity on the Niagara frontier, Brock decided to send troops from York west to reinforce Amherstburg, near Sandwich.  Brock arrived at Amherstburg on August 13.  The reinforcements provided an additional 350 militia and 60 regulars at the Fort.

At Fort Ameherstburg, Brock met with Shawnee Chief Tecumseh.  The two men quickly established a good rapport and respected and admired one another.  Brock decided to plan an immediate attack on Detroit despite the misgivings of many of his subordinates.  But Brock was confident that success was possible.  Hull had retreated from Sandwich to Detroit on August 8.  And the British had intercepted mail from Hull's army, from which they learned that the Americans were short on supplies, their morale was low, and they feared the number of First Nations opposing them. 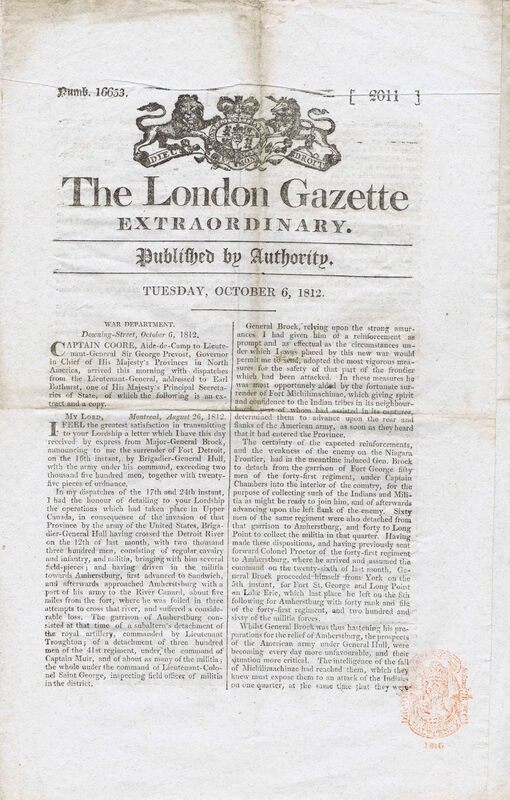 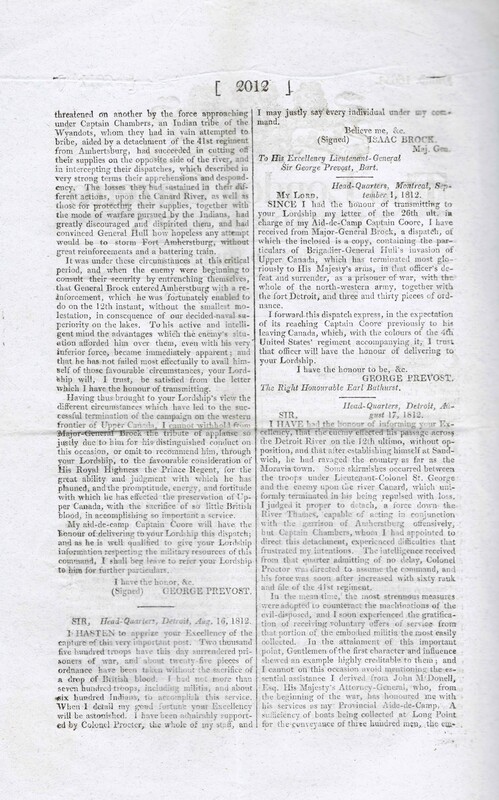 London Gazette Extraordinary, October 6, 1812.  This page includes a copy of Brock's letter to Sir George Prevost informing him of his success at Detroit.

On August 15, Brock sent his aides under a flag of truce to deliver a  summons to General Hull demanding his surrender, noting that once a battle commenced, the Indigenous armies would be beyond his control.  Hull rejected the demand.  The British battery at Sandwich opened fire on Detroit and the Americans returned the fire.

That night, more than 500 First Nations warriors crossed the river and landed near Detroit.   They were joined by more than 700 British regulars, artillery, and militia at daylight.  The assembled force advanced in sections with intervals between them to give the illusion of greater numbers.  Although his force would be outnumbered by the Americans, Brock continued to advance.  As the combined forces approached Detroit, a white flag was raised in the fort.  The Americans had surrendered before the battle had commenced.    The British now had the entire Michigan territory under their control.

That same day Isaac Brock wrote a letter to Lieutenant General Sir George Prevost, informing him of the victory.  He wrote, "I hasten to apprize your Excellency of the capture of this very important post.  Two thousand five hundred troops have this day surrendered prisoners of war, and about twenty-five pieces of ordnance have been taken without the sacrifice of a drop of British blood.  I had not more than seven hundred troops, including militia, and about six hundred Indians, to accomplish this service.  When I detail my good fortune your Excellency will be astonished.  I have been admirably supported by Colonel Proctor, the whole of my staff, and I may justly say every individual under my command".  It was a brilliant victory for Isaac Brock and the British.  It also provided the citizens of Upper Canada with the confidence that the colony could be successfully defended against the Americans.