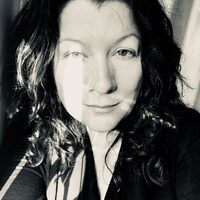 Amy Friend
We move, we are still (From the Multiverse Series), 2020. Pigment print.
“Do parallel universes exist? This image from the Multi-verse Series relates to this question. The term ‘multiverse’ was coined by physicists and cosmologists, referring to a theory that claims the existence of multiple universes existing alongside one another, including the one that we currently occupy. I intentionally break the term apart with a hyphen, switching ‘multiverse’ to ‘multi-verse,’ highlighting the word’s interpretative potential.

Photographs constantly shift and their seeming solidity becomes malleable. I respond to this thought by creating light interventions on the photo’s surface to bring forward ethereal connections that also leave room for the timely allusion to a global existential discomfort. In this series, I work to find meaning in the chaos, to be with it and to search for an alternate story from where we are - a multiverse.”

Tiny tears fill an ocean, 2020. Pigment print.
“What are we but tears and air?
The making of this work began when I revisited a selection of photographs I had taken of various bodies of water over the course of twenty years. I printed several of the photographs and eventually immersed them in sea water collected from earlier travels. After several weeks the water evaporated leaving behind crystalline traces of salt.
This is a series that is in progress. I am focused on the interplay between the salt content of sea water and the salt content of our bodies, of our tears.” 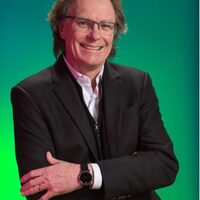 Derek Knight
“The camera affords us all the capacity to make images. My photographs are fragments of time, often taken from television screens, magazines, or old 8mm film, capturing events to which I am only privy as a reader, viewer, or consumer of media. Sometimes these manifest as abstract scans of an electronic or transmitted signal taken from a colour or black and white television set with colour slide film; other times, legible impressions of fragments of figures, buildings and the like emerge as de-constructed vision. Double or quadruple couplings of images open dialogical relationships and from which possible narratives emerge. Their titles allow resonances of literary, poetic or art historical memory. The sometimes, stark contrast between a mediated (or rephotographed) image and those documenting my own immediate environs, is an attempt to define the space between lived experience and events (or objects) documented, historicized or gleaned from across a spectrum of material culture, but which also constitute a personal archive.” 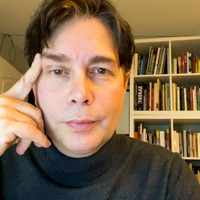 VirtuReal is a light/sound installation work; using modem sounds and fibre optics. The conduit, in this work, came from cut-off pieces obtained from a crew installing fibre optic cable in my neighbourhood in June of 2021.

In this project, I wanted to blend the physical or "real" material with the "virtual" sounds of a bygone era. For me, the virtual is only a potential - a potential of movement where things have not yet happened. At the same time, material things must exist to provide the "fuel" in an endless entanglement of possibility. This fibre optics installation was part of a larger project to connect us all with communications technologies. Most of our physical interactions with culture were impacted during the pandemic and deemed as non-essential. Museums, theatres, music venues closed, and artists responded by creating virtual events.

The use of the truncated fibre, in this installation, signals the return to social interaction and, at the same time, reacts to the dependency we had on digital technologies to keep many of us safe during the pandemic. The circular forms symbolize our spheres of influence as we physically distanced and attempted to interact with family and friends. Thus, the interlocking chain becomes a bit of a contradiction, signalling chains for support and the feeling of being captive, isolated, and enslaved by the same apparatus designed to keep us safe.

Using modem sounds, audible codes, the listener should hear a faint calling out through a virtual handshake (as it was once called). As we move from online environments to meeting in person, post-pandemic, we will be performing physical handshakes. My hope is that the modes of production we were used to will resume with renewed insights. 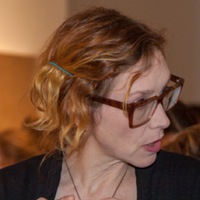 “Issues of encroachment of cities into wild space raise questions of animal rights. Do animals ‘own’ the wild spaces that they depend upon for life and sustenance? Within systems of property rights through capitalism, animals have no land rights. How does this new reality of the disposability of animals fit within the Canadian psyche, one in which “nature” predominates? This project springs from my desire to repopulate southern Ontario with the animals that once would have proliferated here. To brush up against animal encounters is an experience of majesty, intimacy, and humility. I hope this project inspires a sense of our deep interconnectedness with the forces of nature. How does a return of the animal-other transform public space in the experience of the viewer? Midst questions our relationship to natural and architectural spaces, inviting our imaginations to populate those spaces. It prompts the viewer to engage in questions of embodied perception and the fluidity of lived experience. My recent artworks deal with animals and can be seen as part of a contemporary movement that concerns itself with the animal self and animal other. How do we rethink what it is to be an animal beyond being another disposable body for the interests of advanced capitalism? How does a celebration of an animal shift the values of a global, technological world?”

“This image began as have many moments through our pandemic: my partner and young child improvise some kind of ridiculous game, and I reach for my phone or camera to document the antics. We have been at home, sometimes happily, full of joy and thankful for our safe space. At other times we are fraught, feeling trapped, bereft in loss, aggrieved, deeply saddened without our friends and family’s physical presence. Like many others, I often chase away worries about how this pandemic will impact the health and psyche of my young child. The play monster wearing a crown and chasing a gleeful child encapsulates so many of these feelings. The paper crown evokes the spikey “corona” of the corona virus. I chose to rotoscope the image to bring it closer to the colourful realm of the imagination—but also the realm of monsters whether real or imagined. Animating, shooting video, drawing, and other creative actions have been a balm for the epidemic. Through art forms we can generously engage our family, friends, and communities’ members, to confirm our realities whether our experiences are shared or distinct.”