Boston and the Parkman-Webster Murder Case 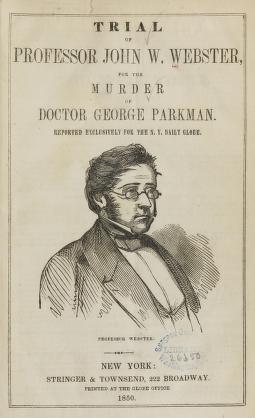 Title page of the Trial of Professor John W. Webster for the murder of Doctor George Parkman:  reported exclusively for the N.Y. daily globe, 1850

On August 30 Baker arrived back in Boston shortly after 12 o'clock, 245 miles from Albany.  He makes reference to a highly publicized murder case in relation to his arrival, delaying his return to Boston and noting that "This being the day set apart for the hanging of Professor Webster [we] did not wish to get into Boston until this awful tragedy was over.  Left in the cars of the Eastern R. Road and reached home 3 1/2 o'clock p.m."

Professor John Webster was a lecturer at Harvard Medical College who was accused of murdering George Parkman, a wealthy and well-known Boston businessman.  Webster owed money to Parkman, who was last seen entering Harvard Medical College.  The janitor at the College, Ephraim Littlefield, became suspicious of Webster and discovered Parkman's partially burned remains in Webster's laboratory.   Professor Webster was indicted for murder on January 26, 1850.  In the trial that followed Webster maintained his innocence.

After deliberating for less than three hours on March 30 the jury returned a verdict of guilty and the judge sentenced him to death.  Eventually Webster confessed to the murder, claiming that it was an act of self-defence when Parkman became aggressive with him over his debt.  Webster was publicly hanged in Boston on August 30, 1850.