Stamford Township was originally called Mount Dorchester after Sir Guy Carleton, the Earl of Dorchester. It was also known as Township no. 2. In 1793, Stamford's municipal government included: Ezekiel Woodruff, town clerk; ambassadors, John Wilson and Benjamin Skinner and town wardens, John Wilson and Thomas McMicking.  Most of the original settlers in this area were United Empire Loyalists.

Stamford Village was the largest community in the township and it dated back to  1783. The village had no formal municipal government,  but a meeting house was built in 1787 next to the local cemetery. This Meeting House became the Stamford Presbyterian Church, which was the first Presbyterian Church in Upper Canada. Stamford Village is rich in history.  Much has been written about the historic homes and churches. This project will move into a less-distant past to review the merchants and entrepreneurs who began their businesses in the Stamford community.

The area from Portage Road to St. Andrew Avenue and from O'Neil Street to Riall Street makes up Stamford Village.  In the 1950s and 1960s, Stamford provided an idyllic setting which was  dotted with farms, orchards, churches and schools. It was progressive in that there were places to shop, post offices, a volunteer fire department and police service. It was an ideal place for young families to settle.  After many meetings and a great deal of deliberation, the Township of Stamford amalgamated with the City of Niagara Falls on January 1, 1963.

This collection will focus on tourist camps, Collard's Corner and the two plazas that served the citizens of Stamford Village. For many, it will be a trip down memory lane as they recall a time when Stamford was a refreshing blend of rural and commercial community. 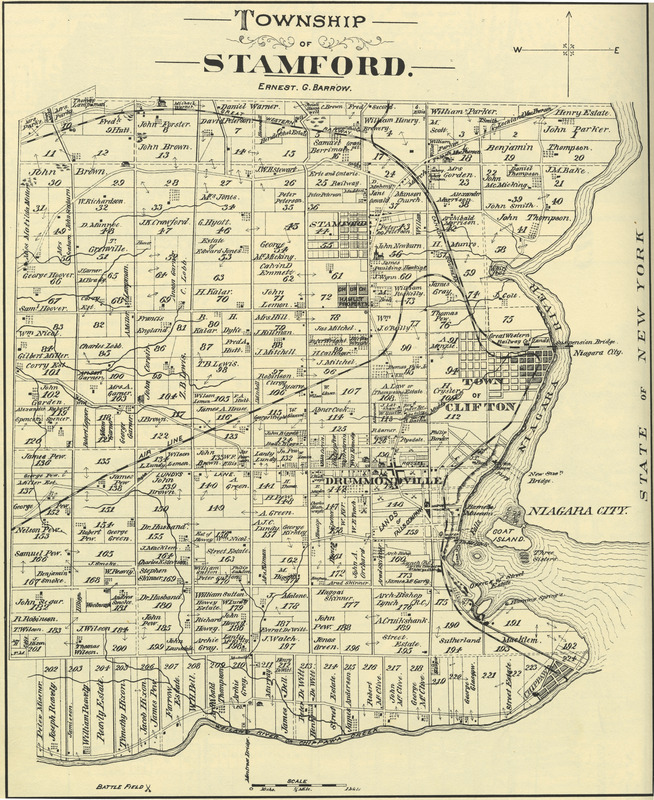 An interesting aspect of Stamford Village is Stamford Green which is the only village green in Canada. This is a wedge shaped piece of land which is located between St. Paul Avenue and Portage Road. The Dee Family originally owned this land. Captain R.H. Dee was aide-de-camp to Lieutenant-Governor Sir Peregrine Maitland.  The Dee Family allowed the public to have use of the property.  In 1909, the residents of Stamford Township purchased the land and it was placed under the control of a board of trustees. Doctor John Dee stipulated that the land would always be used as a public park. He also stipulated that it would not be fenced, no trees were to be planted and no buildings were to be erected on the land. The land was used as a bowling green between 1923 to 1938.  St. John's Anglican church held strawberry festivals on the green and it was home to the very popular Stamford Centre Volunteer Firemen's Association Carnival. 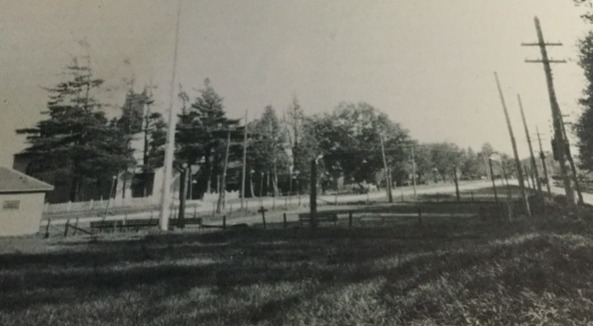 Stamford Green showing enclosed lawn bowling green which was there from 1923-1938. The roadway at the right was the new King’s Highway Number 8.