The battle to conquer Upper Canada 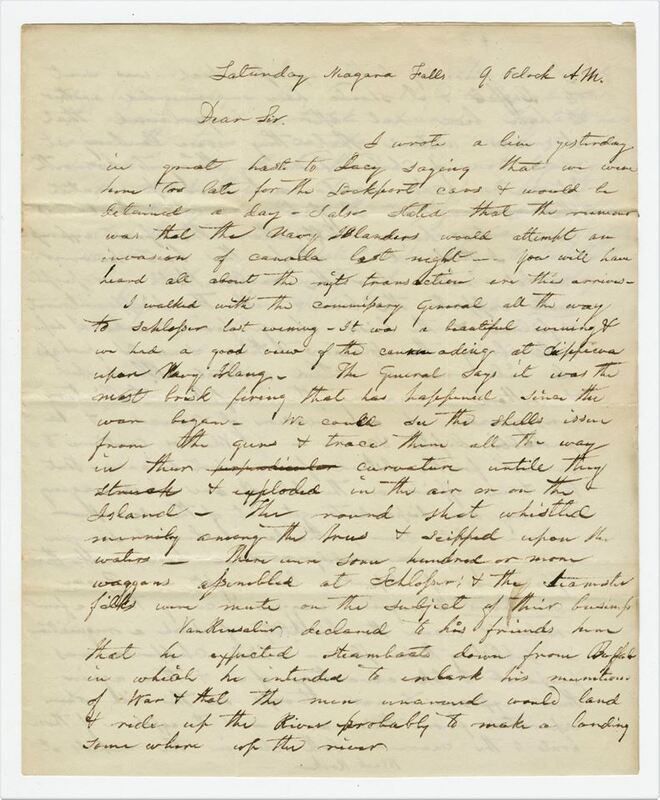 In mid-January 1838, John Clark missed a ride back to Buffalo from Niagara Falls. He had to stay an extra night and as a result, he witnessed a bit of history.

This letter details the final flurry of action between the Canadian rebels led by William Lyon Mackenzie and the British army and Canadian militia. The rebels had been entrenched on Navy Island for a month after a failed coup of the provincial government in Toronto. Clark's letter reads in part:

"...the rumor was that the Navy Islanders would attempt an invasion of Canada last night... It was a beautiful evening & we had a good view of the cannonading at Chippewa upon Navy Island. The General says it was the most brisk firing that has happened since the war began. We could see the shells issue from the guns & trace them all the way in their curvature until they struck & exploded in the air or on the island. The round shot whistled merrily among the trees & skipped upon the waters."

"Volunteers continue to arrive for the Island from great distances – But the true affairs on the Island are discouraging & many are disposed to get out of the scrape."

The last line here was prophetic as the rebels did abandon the island shortly after this bombardment.

This letter comes from the Burwell-Clark-Glenny Family Collection in the Brock University Archives and contains even more interesting details. Visit - http://dr.library.brocku.ca/handle/10464/13901 for more.