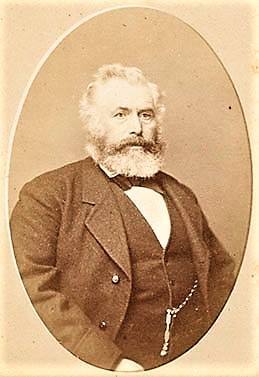 "I was sure the old iron horse “Stromness” would not fail me at the last." ~ Sir John A. Macdonald

The Prime Minister wrote this letter to Lachlan McCallum (aka "Stromness") in 1882 after McCallum maintained a seat in the House of Commons representing the Monck electoral district which was comprised of parts of Lincoln, Welland and Haldimand Counties.

Lachlan was born in Scotland and settled in Stromness, Ontario in 1842. He managed several businesses - milling, lumbering, shipbuilding - before turning to politics. In 1866, McCallum captained the Dunnville Naval Brigade to Fort Erie on one of his tugboats to fight the invading Fenians.

Lachlan first ventured into government in 1863 as a reeve and later became an MPP, MP and Senator. As a Liberal-Conservative, he was a vocal advocate for the enlargement of the Welland Canal, the building of an all Canadian railway, and a supporter of the National Policy.

The Lachlan McCallum archives were donated to Brock in November 2018. Among the records are 12 letters from John A. Macdonald regarding scandals on the Welland Canal, elections, and some political positioning. One letter ends, "I need not say that this letter is for your own eyes only & had better be burnt after you read it."

This collection can be found digitally here - http://dr.library.brocku.ca/handle/10464/13790.   The originals are in the Brock University Archives 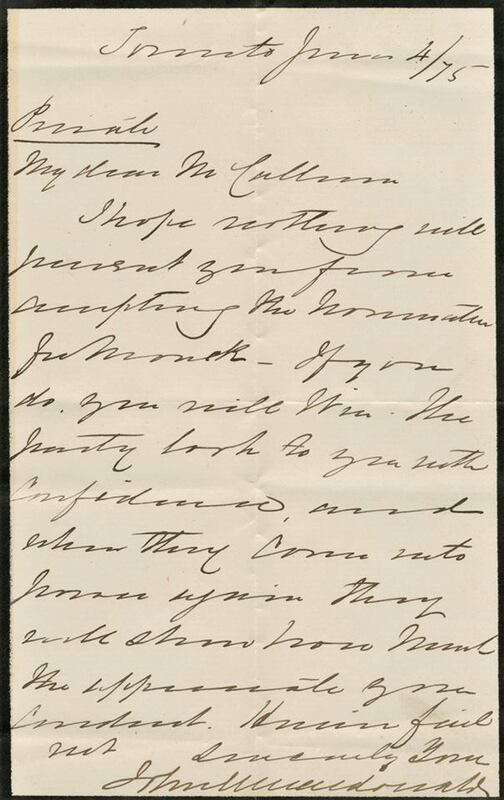 Letter from Prime Minister John A. Macdonald to Member of Parliament Lachlan McCallum, 1875

I hope nothing will prevent you from accepting the nomination for Monck - if you do, you will win. The party took to you with confidence and when they come into power again they will show how much we appreciate your conduct. Herein fail not.