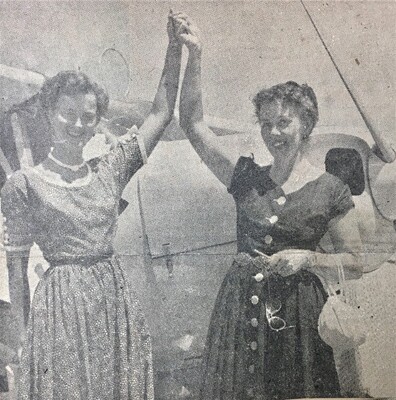 Newspaper clipping of Alice Little and Dorothy Rungeling raising their hands at a airplane race, 1953.

This classic line from the movie Top Gun captures the spirit of Pelham pilot Dorothy Rungeling. Beginning in the 1950s, Dorothy competed in air races all over North America. And she did not just participate. Dorothy won or placed in races against both men and women. She and her fellow female pilots broke the traditional stereotypes of women of the era.

Dorothy had many firsts: the first woman to fly a helicopter solo in Canada; among the first women to obtain a pilot's licence back in 1949; the first Canadian woman to fly in an international air race; and one of the first governors of the Canadian Flying 99s women's flying club. And thus, she received many honours including the Order of Canada, Amelia Earhart Medal, Governor-General’s Cup, Aviation Writers Award and she appeared on a Canadian stamp. In 2015, the Niagara airport was named after her.

In two weeks (June 20), the international 2019 Air Race Classic will be finishing at the Niagara Central Dorothy Rungeling Airport. This is the first time that this race is coming to Ontario. On June 21, a plaque will be unveiled in honor of Dorothy to commemorate this historical racing event which tests the skills and training of female pilots. Keep an eye on the skies!

The Brock University Archives is fortunate to have the scrapbooks that Dorothy kept from her aviation years. Pictured here are a painted, linen sign for Dorothy and her co-pilot Alice Little, a clipping of Dorothy and Alice raising their hands after a race, and a photo of Dorothy with her plane which was sponsored by Thompson Products of St. Catharines.

More records from Dorothy's collection can be found at http://dr.library.brocku.ca/handle/10464/6175. 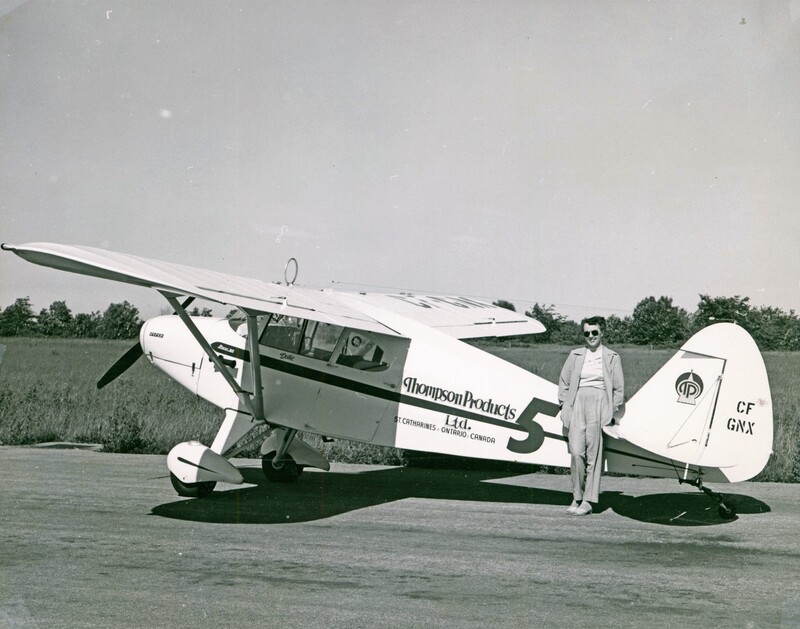 Dorothy Rungeling posing by her airplane in 1952