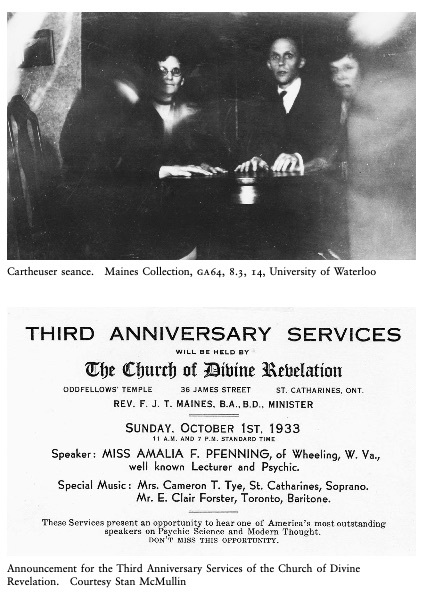 Radiant Healing Centre and The Church of Divine Revelation

Spirituality can play a significant role in one's health and wellness. It was thought that a séance could provide alternative medicine. The proponents of this train of thought did not believe in a division of medicine and faith. They believed in a unity of spirit, mind and body. Supposedly, voices emanated from trumpets (aluminum cones) which were used for the séances. These voices were distinctly different from the medium’s voice. The trumpets were also known to levitate. People felt as if they were being touched and taps on the table were heard. “Dr. Anderson” was an old- fashioned (deceased) doctor who supposedly dispensed medical wisdom and sympathy. He gave some biographical information about himself at one session. He said that his full name was John Berry Anderson and he graduated from Pittsburgh University in the late 1700s. He then attended Columbia University in New York City. [This information does not seem to be verified].

Jenny Helena Florence O'Hara married Robert Newton Pincock and her sister married Fred Maines who was an ordained minister. They began to hold seances with Mr. William Cartheuser, an American medium. The Maines and Pincocks began the Church of the Divine Revelation in St. Catharines, Ontario on Sept. 6, 1930 with Fred Maines as the ordained minister. He remained in this position from 1930-1935. Dr. Anderson (in spirit form) provided instructions for the running of the church. In 1931, the United Church of Canada into which Maines had originally been ordained suspended him because of his foray into spiritualism. Maines was also ordained into the spiritualist ministry. In 1932, they established the Radiant Healing Centre which was also located in St. Catharines, Ontario. On the Radiant Healing Centre correspondence it states that the centre is “under guidance of ‘Dr. Anderson’ who manifests in direct voice through psychic powers of Dr. William Cartheuser”. William worked for the New York section of the American Society for Psychical Research. He also maintained a home at Lily Dale Spiritualist Camp, New York (southwest of Buffalo, New York). Jenny spent summers working as a librarian at Lily Dale. Officers of the Radiant Healing Centre after 1935 were listed as: Rev. Wm. Cartheuser; Mr. Ivan H. Hare, head disciple and treasurer and Mrs. Jean E. Tye, secretary. 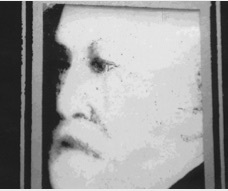 Just who was Dr. Anderson? Nobody actually saw him. This is a spirit picture of him. He would manifest in voice through William Cartheuser. 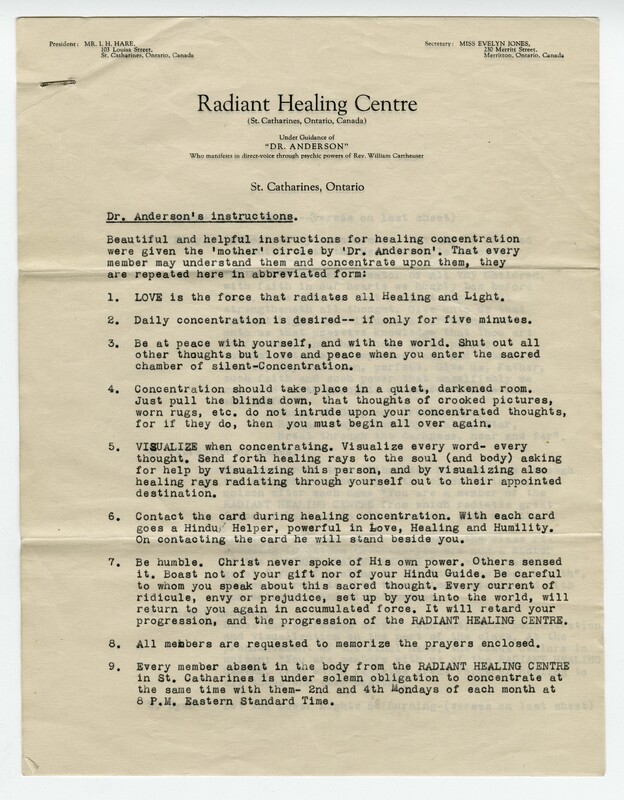 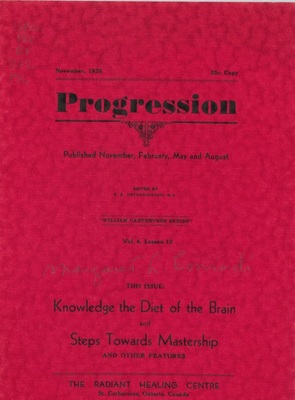 Archives and Special Collections also houses "Progression" which was produced by the Radiant Healing Centre. Issues are dated 1932-1938.