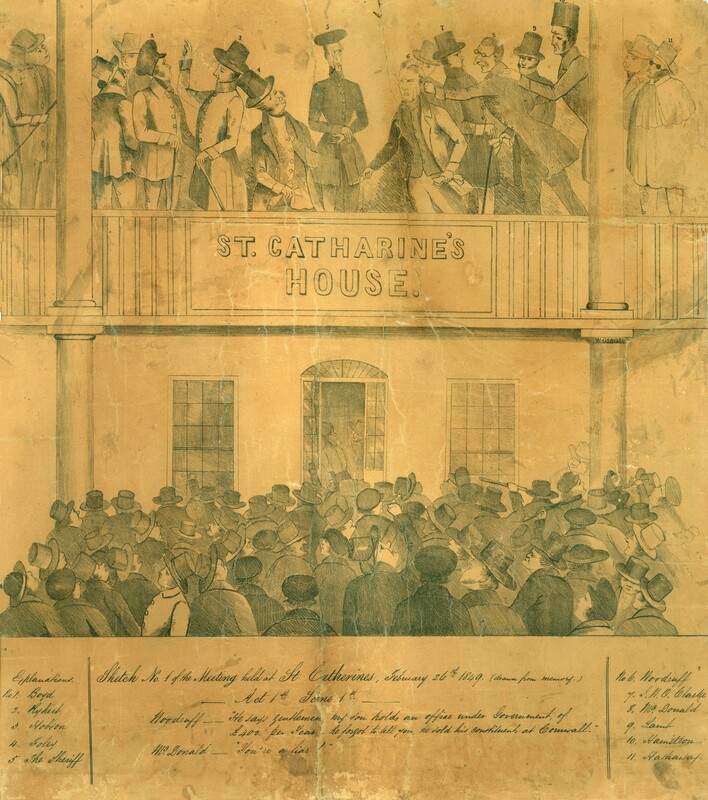 Fight at the St. Catharines House, a sketch by W. Osborn

Although this is a piece of art, it is also a fascinating moment in local history. This is a drawing of a meeting held at the St. Catharines House on February 26, 1849. The drawing was done from memory by W. Osborn who has signed the picture on one of the pillars on the right hand side. The caption under the picture reads "Act 1st Scene 1st". There is some dialogue, "Woodruff - 'He says gentlemen, my son holds an office under Government, of 400 pounds per year - he forgot to tell you, he sold his constituents at Cornwall' - Macdonald 'You're a liar'". The artist portrays a fight breaking out and lists the characters as Boyd , Rykert, Hobdon, Foley, The Sheriff, Woodruff, J.W.O. Clarke, McDonald, Lamb, Hamilton and Hathaway. [Rolland MacDonald (1810-1881) represented Cornwall in the Legislative Assembly of the Province of Canada from 1844-1846. He was called to the bar in 1832 and set up practice in St. Catharines. The quote on the drawing concerns the constituents at Cornwall. This meeting was covered in reports in the St. Catharines Journal on: March 1, March 8, march 15 and march 22, 1849. There is also an excerpt in William Hamilton Merritt's diary noting the riot and the sketch by Osborn].

The meeting held at St. Catharines, 26th February, gave a stimulus to the pictorial art of a Mr. Osborn, then a rare event, and the action of the meeting, with the likenesses of the principal characters, was graphically delineated Among them was Mr. John McMullen, afterwards the compiler of French Canadian and English History. He gives a very brief notice indeed at the close of that History:— “Some rioting occurred at public meetings got up to vote on addresses, &c."