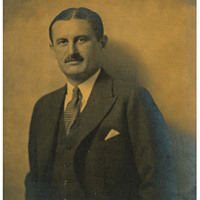 This letter can be found in the Arthur A. Schmon fonds - RG 524, Archives and Special Collections, Brock University Library

In 1917, Louis Syberkrop, of Iowa penned a letter that made headlines.

The letter was addressed to Wilhelm von Hohenzollern, King of Prussia

“To Wilhelm von Hohenzollern, King of Prussia, Emperor of all Germany and Envoy Extraordinary of Almighty God: .

“My Dear Wilhelm: “I can call you by that familiar name, for I have always been very close to you, much closer than you could ever know. “From the time that you were yet an undeveloped being in your mother's womb, I have shaped your destiny for my own purpose.

"In the days of Rome I created a roughneck known in history as Nero, he was a vulgar character and suited my purpose at that particular time. In these modern days a classic demon and efﬁcient super-criminal was needed and as I know the Hohenzollern blood I picked you as my special instrument to place on earth an annex of hell. I gave you abnormal ambition, likewise an over supply of egotism that you might not discover your own failings; I twisted your mind to that of a mad man with certain normal tendencies to carry you by, a most dangerous character placed in power; I gave you the power of a hypnotist and a certain magnetic force that you might sway your people. I am responsible for the deformed arm that hangs helpless on your left for your crippled condition embitters your life and destroys all noble impulses that might otherwise cause me anxiety, but your strong sword arm is driven by your ambition that squelches all sentiment and pity; I placed in your soul a deep hatred for all things English, for of all nations on earth I hate England most; wherever England plants her ﬂag she brings order out of chaos and the hated Cross follows the Union Jack; under her rule wild tribes become tillers of the soil and in due time practical citizens; she is the great civilizer of the globe and I HATE HER. I planted in your soul a cruel hatred for your mother because SHE was English and left my good friend Bismarck to fan the ﬂame I had kindled. Recent history proves how well our work was done. It broke your royal mother's heart, but I gained my purpose.

"The inherited disease of the Hohenzollerns killed your father, just as it will kill you, and you became the ruler of Germany and a tool of mine sooner than I expected.

"To assist you and farther hasten my work I sent you three evil spirits, Nietzsche, Treitschke and later Bernhardi, whose teachings inﬂamed the youths of Germany, who in good time would be willing and loyal subjects and eager to spill their blood and pull your chestnuts, yours and mine; the spell has been perfect— you cast your ambitious eyes toward the Mediterranean, Egypt, India and the Dardanelles and you began your great railway to Bagdad, but the ambitious archduke and his more ambitious wife stood in your way. It was then that I sowed the seed in your heart that blossomed into the assassination of the duke and his wife, and hell smiled when it saw how cleverly you saddled the crime on Serbia. I saw you set sails for the fjords of Norway and I knew you would prove an alibi. How cleverly done, so much like your noble grandfather, who also secured an assassin to remove old King Frederick of Denmark, and later robbed that country of two provinces that gave Germany an opportunity to become a naval power. Murder is dirty work, but it takes a Hohenzollern to make a way and get by.

. “Your opportunity was at hand; you set the world on ﬁre and bells of hell were ringing; your rape of Belgium caused much joy, it was the beginning, the foundation of a perfect hell on earth, the destruction of noble cathedrals and other inﬁnite works of art was hailed with joy in the infernal regions. You made war on friends and foe alike and the murder of civilians showed my teachings had borne fruit. Your treachery toward neutral nations hastened a universal upheaval, the thing I most desired. Your under-sea warfare is a master stroke, from the smallest mackerel pot to the great Lusitania you show no favorites; as a war lord you stand supreme, for you have no mercy; you have no consideration for the baby clinging to its mother's breast as they both go down into the deep together, only to be torn apart and leisurely devoured by sharks down among the corals.

"I have strolled over the battleﬁelds of Belgium and France. I have seen your hand of destruction everywhere; it’s all your work, super-ﬁend that I made you. I have seen the ﬁelds of Poland; now a wilderness ﬁt for prowling beasts only; no merry children in Poland now; they all succumbed to frost and starvation - I drifted down into Galicia where formerly Jews and Gentiles lived happily together; I found but ruins and ashes; I felt a curious pride in my pupil, for it was all above my expectation. I was in Belgium when you drove the peaceful population before you like cattle into slavery; you separated man and wife and forced them to hard labor in trenches. I have seen the most ﬁendish rape committed on young women and those who were forced into maternity were cursing the father of their offspring and I began to doubt if my own inferno was really up to date.

“You have taken millions of dollars from innocent victims and called it indemnity; you have lived fat on the land you usurped and sent the real owners away to starvation. You have strayed away from all legalized war methods and introduced a code of your own. You have killed and robbed the people of friendly nations and destroyed their property. You are a liar, a hypocrite, and a bluffer of the highest magnitude. You are a part of mine, and yet you pose as a personal friend of God. Ah, Wilhelm, you are a wonder. You wantonly destroy all things in your path and leave nothing for coming generations.

"I was amazed when I saw you form a partnership with the impossible Turk, the chronic killer of Christians, and you a devout worshipper in the Lutheran church. I confess, Wilhelm, you are a puzzle at times. A Mohammedan army, commanded by German officers, assisting one another in massacring Christians is a new line of warfare. When a Prussian officer can witness a nude woman being disembowelled by a swarthy Turk, committing a. double murder with one cut of his sabre, and calmly stand by and see a house full of innocent Armenians locked up, the house saturated with oil and ﬁred, then my teachings did not stop with you, but have been extended to the whole German nation. I confess my Satanic soul grew sick and there and then I knew the pupil had become the master. I am a back number, and my dear Wilhelm, I abdicate in your favor. The great key of hell will be turned over to you. The gravel that has struck the doom of damned souls since time began is yours. I am satisﬁed with what I have done; that my abdication in your favor is for the very best interests of hell—in the future I am at your majesty’s service. Affectionately and sincerely, “LUCIFER H. SATAN.”